To register, click here or on any of the events below.

The Scholars Network is co-organized by the SNF Agora Institute at Johns Hopkins University and the Research Hub for Youth Organizing at University of Colorado Boulder. 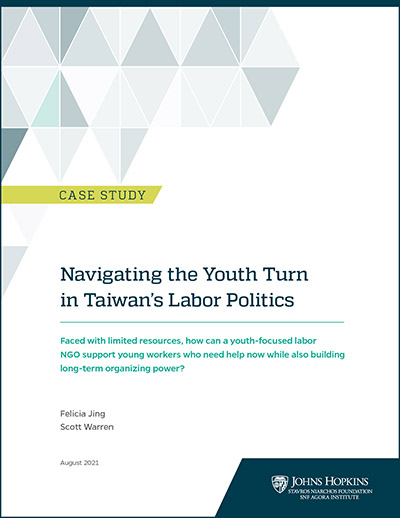 This case study focuses on the Youth Labor Union 95 (YLU95), a labor NGO based in Taipei, Taiwan. When it was founded in 2008, YLU95 initially offered legal support to youth who were struggling with work-related issues. But the group faced challenges to its larger strategic efforts to organize workers around issues particularly relevant to young people, including youth poverty, holiday work, minimum wage violations, and insurance evasion. Recognizing that their legal casework did not give young workers an opportunity to form broader connections and build a sense of camaraderie with the greater labor movement, the YLU95 faced a choice-point in determining a new strategy to address the general lack of collective identity among young workers in Taipei. 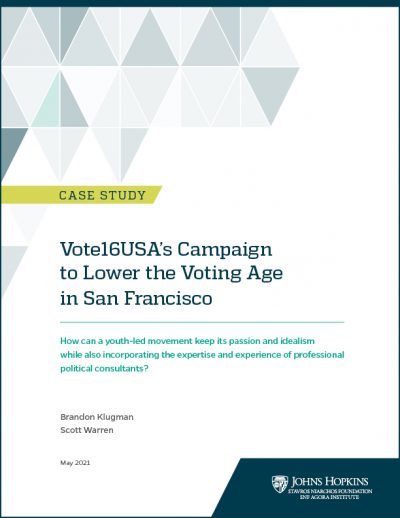 How can a youth-led movement keep its passion and idealism while also incorporating the expertise and experience of professional political consultants?

This case study explores challenges that emerged for a coalition of high school–aged activists involved in the Vote16SF campaign, a movement to lower the voting age in San Francisco. This activist group, led by young people, sought to balance the passion and idealism of its convictions with the need to convince a plurality of (mostly older) voters to support an initiative that they initially viewed with skepticism. Striking that balance raises important questions about how to preserve and elevate the voice and authenticity of the people most affected by policy decisions while also taking advantage of the acquired political expertise and experience of professional political consultants. 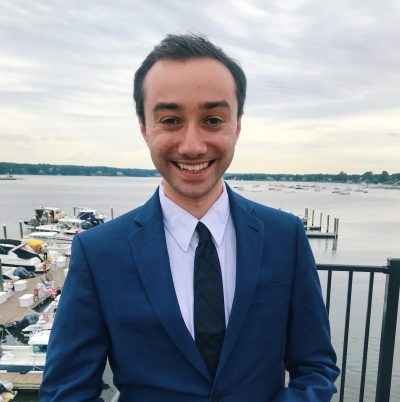 Brandon Klugman is the associate director of campaigns at Generation Citizen, where he leads the Vote16USA campaign to support youth-led advocacy to lower the voting age to 16. He joined Generation Citizen in 2015 to help launch Vote16USA. In the years since, Klugman has partnered with youth activists to lead advocacy campaigns in multiple states and has helped build support for the policy idea on a national level.

Bonnie Jin is a Boston-based student of International Studies at Johns Hopkins University. Her current work with progressive campaigns bridges the gap between foreign policy and local intercultural needs. As former executive director of European Horizons, an international student-led policy incubator, she strives to amplify the voices of students and to use research to improve public policy.

Farida Nabourema is a social activist and writer, recently emerging as the unequivocal voice of Togo’s pro-democracy movement. Nabourema has been a fearless advocate for democracy and human rights in Togo since she was a teenager. Through hundreds of articles written on her blog and other sites, Nabourema denounces corruption and dictatorship, and promotes a form of progressive Pan Africanism. In 2014, Farida published a book in French titled La Pression de oppression (The Pressure of Oppression), in which she discussed the different forms of oppression that people face throughout Africa and highlighted the need for youth and women to be politically engaged.

Nabourema also serves as the executive director of the Togolese Civil League, an NGO that promotes democracy and human rights in Togo through grassroots organizing, civic education, and advocacy. Prior to taking that position, Farida founded the “Faure Must Go” movement in 2011, where she organized thousands of Togolese youths to stand against the dictatorial regime of Faure Gnassingbe. “Faure Must Go” has become the slogan for the civil resistance movement in Togo of which Nabourema is one of the most well-known leaders.

Nabourema is the coordinator of the Gender Equality Network for Small arms Control (GENSAC) and is a 2021 Jennings Randolph Senior Research Fellow at the USIP, where she is conducting research on gender-based repression in nonviolent movements in Africa. Nabourema is also a 2020 Freedom Fellow at the Human Rights Foundation and an Inclusive Global Leadership Initiative practitioner in residence at the Joseph Korbel School of International Studies, where she is teaching a class, titled Authoritarianism in the Digital Age, as an adjunct professor.

Nabourema has risen to become one of the most influential faces in the efforts for democracy in Togo and the West African region, and she was awarded the Young Female Advocate of the Year in 2017 by African Youth Awards and named one of the Most Influential African Women in 2019 by Avance Media. Nabourema was also listed as one of the Four Crusaders Keeping The Dream of Democracy Alive in 2018 by Times Magazine. In 2021, Farida was named among the 100 Most Influential People in Gender Policy by Apolitical.

Led by by SNF Agora Visiting Fellow Scott Warren, Democracy Moves helps global and regional youth organizations build capacity by connecting young leaders across borders and providing them with valuable tools, resources, trainings, and more. The organization creates the space needed to have difficult conversations, to learn, and to grow together. The network will be incubated by SNF Agora during spring 2020.

Our mission is to develop, connect, and inform youth activists who collectively improve the global state of democracy.

Democracy Moves believes a better world is possible, that more just and participatory democracies are possible, and that young people have the power to create change in their communities and countries.

To achieve these goals, Democracy Moves is building a global movement for democracy, led by young people. Youth organizations can reach across cultural and geographic boundaries, learn from each other, and apply proven methods.

My greatest hope for democracy lies with our young people. Data shows that millennials and Generation Z are more tolerant, more diverse, and more committed to looking to government as a solution for public problems than older generations. They have grown up as digital natives and still are more accepting than their predecessors of the many ways in which people are different from each other.

My hope stems not only from looking at the data, however. It also comes from the many ways in which I interact with young people through my teaching and scholarship, where I see young leaders as the ones who are pushing all of us to be better. A renowned community organizer and professor at Harvard, Marshall Ganz, often says that it is no surprise that young people have been at the forefront of social change for centuries—for it is young people who have the “critical eye and hopeful heart” that make fighting for a better world worthwhile.

Demography is not destiny, however. My greatest fear is that the energy of young people will dissipate inside a political system that has been hollowed of its ability to solve the most pressing problems in people’s lives. Even as we see young people coming of age with a set of pro-democratic proclivities, we are grappling with a dysfunctional political system. A healthy democracy requires a citizenry that is given opportunities to engage in open, inclusive discourse and action that enables the exercise of voice in the political process. Unfortunately, the democratic norms and institutions that make the exercise of citizenship and citizen voice possible are fraying around the world. We are left with a fragmented, highly unequal politics, in which people are invited to act only as passive consumers of politics, leaving candidates and parties to patch together transactional coalitions based on people’s narrow self-interests. People lack opportunities to commit to the collective good. Instead, our politics are divided by heated debates about who belongs, who deserves dignity, and who among us gets to decide.

Continue reading on the Hub.

Led by the International Center on Nonviolent Conflict, this workshop will focus on four interdependent roles that activists play in movements.  Sometimes these roles conflict.  Sometimes they complement each other. Activists will reflect on their roles within movements, discuss how they can help advance a movement’s agenda, and recognize how they are all needed at different part of a movement’s trajectory.

Too often, our focus on contemporary problems makes it impossible to see beyond immediate constraints that confine our ability to bridge differences to build connections with people whose world views may be different from our own. Responding to this, the Remixing Stories workshop taps icons and narratives borrowed from popular culture to express civic identities and bridge divisions and differences that are making it hard for traditional political institutions to move forward with solving persistent problems. Participants begin by gathering and sharing stories that inspire them. Then, exploring each other’s stories, they start to mix and recombine elements between stories, seeing how the combinations of unexpected elements lead to whole new creative narratives. As story remixing leads to real-life sharing, reflection, debate and collaboration, participants imagine how their combined stories might be enlarged and used to spark social movements and campaigns.