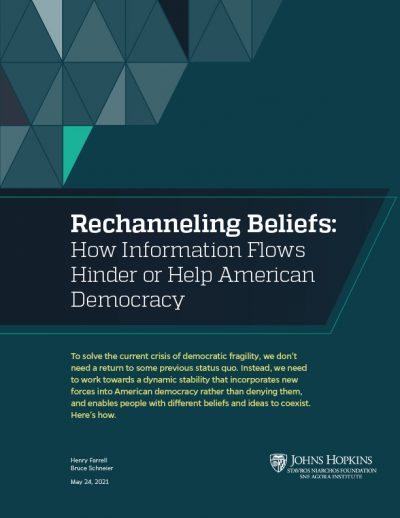 This year, we need to start fixing American democracy. On the technical level, 2020 saw exceptionally successful elections under exceptionally difficult circumstances. People voted in unprecedented numbers despite the coronavirus pandemic. Their votes were counted with no major difficulties. In states such as Georgia, paper records and auditing procedures made it possible to verify the count’s accuracy.

Despite these facts, our institutions and procedures have not created the kinds of shared public consensus over the results that they were supposed to. The famous theorist of democracy, Adam Przeworski, defines democracy as a “system in which parties lose elections.” More broadly, this means a functioning democracy is one where the losers admit they have lost, and then adapt to improve their chances of winning in the future. Many people believed (and continue to believe) that the 2020 election was fixed. They were encouraged in these beliefs by the sitting president’s repeated accusations of fraud and conspiracy, and elected Republican officials who actively supported the president’s claims. What should have been a moment of democratic celebration instead starkly illustrates the fragility of American democracy.

It’s much easier for democratic stability to break down than most people realize, but this doesn’t mean we must despair over the future. It’s possible, though very difficult, to back away from our current situation towards one of greater democratic stability. This wouldn’t entail a restoration of a previous status quo. Instead, it would recognize that the status quo was less stable than it seemed, and a major source of the tensions that have started to unravel it. What we need is a dynamic stability, one that incorporates new forces into American democracy rather than trying to deny or quash them.

This paper is our attempt to explain what this might mean in practice. We start by analyzing the problem and explaining more precisely why a breakdown in public consensus harms democracy. We then look at how these beliefs are being undermined by three feedback loops, in which anti-democratic actions and anti-democratic beliefs feed on each other. Finally, we explain how these feedback loops might be redirected so as to sustain democracy rather than undermining it.

To be clear: redirecting these and other energies in more constructive ways presents enormous challenges, and any plausible success will at best be untidy and provisional. But, almost by definition, that’s true of any successful democratic reforms where people of different beliefs and values need to figure out how to coexist. Even when it’s working well, democracy is messy. Solutions to democratic breakdowns are going to be messy as well.

Read the full report here, or download the PDF below.