By almost any measure, public confidence in government has dropped. Across Western democracies, widespread demonstrations, whether on the streets or online, suggest growing citizen disillusionment. What should elected representatives consider when responding to protests and citizens’ demands? 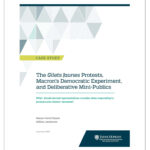 This case study examines five interventions by French President Emmanuel Macron between 2018 and 2021 in response to demands by gilet jaunes protesters, including the eventual introduction and implementation of deliberative mini-publics, government-initiated forums that allow citizens to access balanced information, deliberate, and make recommendations about social and political reforms. It then asks readers which intervention(s) they would pursue and why.

By the end of this study, you should be able to: