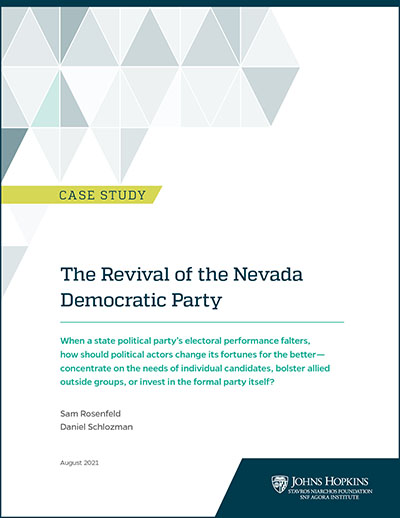 When a state political party’s electoral performance falters, how should political actors change its fortunes for the better—concentrate on the needs of individual candidates, bolster allied outside groups, or invest in the formal party itself?

What does it take to revive a political party? The question matters not only to politicians and party officials, but to activists, social movements, interest groups, and the millions of Americans who stand to lose or gain from the policies that follow electoral shifts in party power.

This case study looks at Nevada’s state Democratic Party, which—in an era when many local and state party organizations have declined—has seen dramatic organizational revival and sustained electoral gains. How was this turnaround achieved? What lessons from the Silver State might be relevant to political actors elsewhere?

Download "The Revival of the Nevada Democratic Party" Case Study

Please fill in the information below to download the requested case study. The SNF Agora Institute collects this information to better understand our audience so we can improve our case studies in the future. We do not sell, rent, share, or otherwise willfully disclose to any third party, email addresses or other personally identifiable information shared on this site, in accordance with the Johns Hopkins University & Medicine Privacy Statement for Websites and Mobile Applications. If you have feedback about this case study or suggestions for future cases, please email us at snfagora@jhu.edu.
Related Content